The relationships resource type allows you to organize the assets in other structures in addition to the standard hierarchical asset structure.

For example, you can choose to organize the assets by their physical location, where the grouping nodes in the hierarchy are buildings and floors, rather than systems and functions. Another example is to build a graph structure that allows you to navigate assets by mimicking their physical connections through wires or pipes.

When you build an asset structure, think of the assets as the nodes in the graph or hierarchical structure, and relationships as the edges. The relationship type distinguishes a structure from other existing structures.

Each asset object can have one of these roles:

Another aspect may be the asset's physical location, where you, for example, first group assets by the room they are located in, then rooms by the floor they are on, the floors by buildings, and buildings by cities. For example: 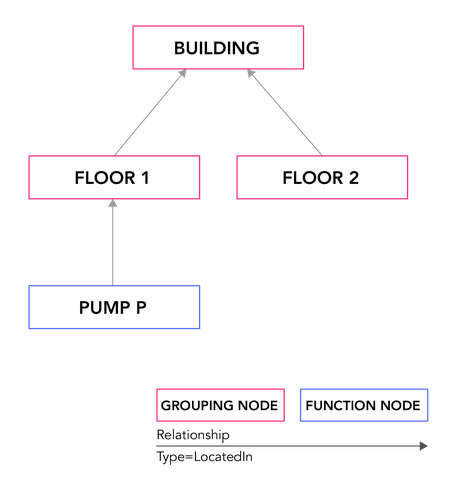 You can use asset resources to represent all the system's relevant functions, and a relationship type, for example, flowsTo, to create the connection between the asset objects. For example:

Throughout its lifetime, physical equipment can serve different roles in a system. For example, a physical pump can be moved between functional locations to meet the changing capacity needs in a system. You can use relationships to model how physical items (asset = item node) have served under different functional nodes (asset = function node) over time using the relationship's time range properties. For example: 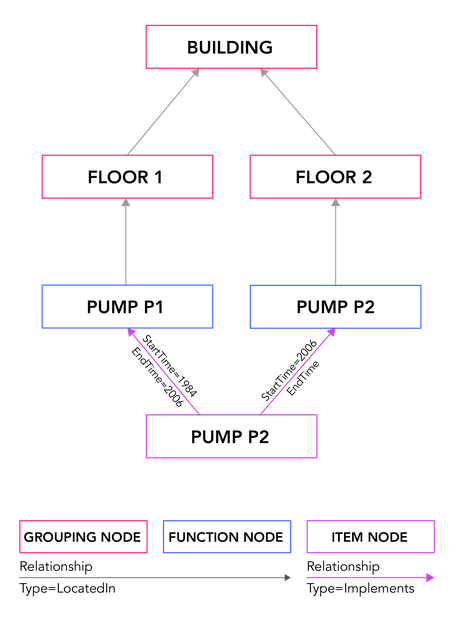